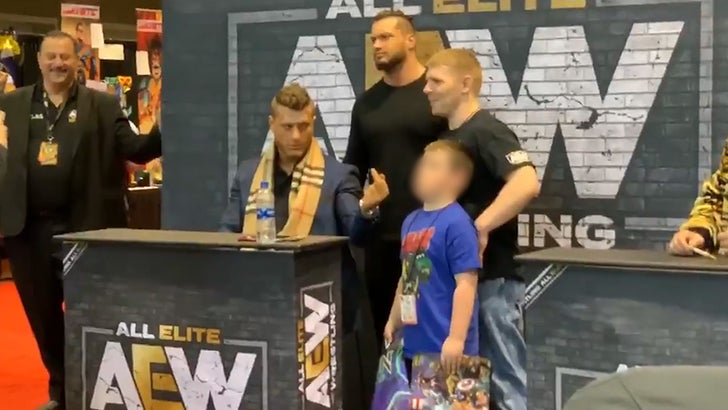 A famous pro wrestler FLIPPED OFF off a 7-year-old kid at a meet and greet in Chicago this weekend -- devastating the kid -- but it begs the question ... should the dad have known better?

MJF is famous for being a heel (that's wrestling speak for "bad guy") and part of his gimmick is being a jerk to kids. It's no secret. Everyone knows.

Parents, watch your kids or @The_MJF will straight 'em up. pic.twitter.com/tLxY5pk2cw

So, when Tom and his son came face to face with MJF, the wrestler busted out the single barrel salute right in the little guy's face ... par for the course for MJF.

You can see in the video the kid looks stunned -- and afterward, Tom raised the issue with AEW vice president Cody Rhodes.

"I tried to laugh it off knowing he’s just in character," Tom said ... "but it really upset him. I know that’s his gimmick but he’s only 7 & doesn’t understand."

Tom says his son is now being mocked online -- and wants AEW to keep talent in check when meeting kids at fan events.

Cody responded to Tom -- essentially saying he should have known what he was getting himself into.

"DISCLAIMER: If you have a meet/greet or inquire media wise for MJF, you'll get MJF," Rhodes said on Twitter.

"Talent have freedom of expression so please don't think anybody is going to act any different than they do on TV."

Rhodes then invited Tom to a future event and promised he'd give the family VIP treatment. Great move on Cody's part.

We reached out to MJF for comment and got back this 3-word statement -- "F**k them kids."

'Lost Girls': The New Netflix Movie Is Based on a Disturbing True Story - Showbiz Cheat Sheet